What is Multidimensional schemas?

Multidimensional schema is especially designed to model data warehouse systems. The schemas are designed to address the unique needs of very large databases designed for the analytical purpose (OLAP).

Following are 3 chief types of multidimensional schemas each having its unique advantages.

In this tutorial, you will learn-

What is a Star Schema?

The star schema is the simplest type of Data Warehouse schema. It is known as star schema as its structure resembles a star. In the Star schema, the center of the star can have one fact tables and numbers of associated dimension tables. It is also known as Star Join Schema and is optimized for querying large data sets. 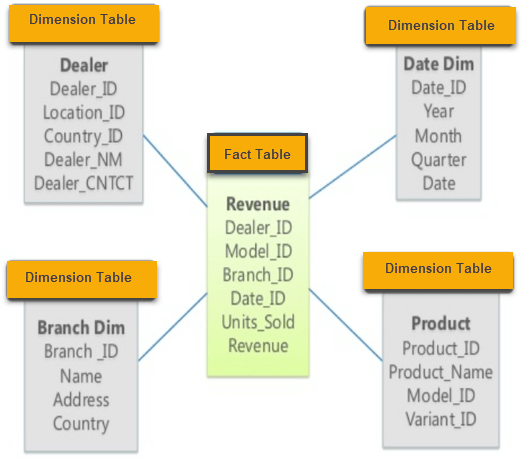 For example, as you can see in the above-given image that fact table is at the center which contains keys to every dimension table like Deal_ID, Model ID, Date_ID, Product_ID, Branch_ID & other attributes like Units sold and revenue.

What is a Snowflake Schema?

A Snowflake Schema is an extension of a Star Schema, and it adds additional dimensions. It is called snowflake because its diagram resembles a Snowflake.

The dimension tables are normalized which splits data into additional tables. In the following example, Country is further normalized into an individual table.

What is a Galaxy schema?

A Galaxy Schema contains two fact table that shares dimension tables. It is also called Fact Constellation Schema. The schema is viewed as a collection of stars hence the name Galaxy Schema.

As you can see in above figure, there are two facts table

What is Star Cluster Schema?

Overlapping dimensions can be found as forks in hierarchies. A fork happens when an entity acts as a parent in two different dimensional hierarchies. Fork entities then identified as classification with one-to-many relationships.