With OSX 10.11 El Capitan, here is how to get the AMP stack up and running. This tutorial will go through the process on getting Apache, MySQL, PHP (or otherwise known as the ‘AMP’ stack) and phpMyAdmin running on the El Capitan OS.

This tutorial sets up the AMP stack in more of a traditional way using the loaded Apache and PHP and downloading MySQL and phpMyAdmin. For macOS Sierra check tutorial here.

If you are looking for more of a GUI set up with no command line required be sure to check out the guide on Pressmatic.

Their is no GUI to toggle Web Sharing on or off in OSX 10.11, which was previously a GUI option in System Preferences way back in 10.7, but fear not Apache is installed ready to be fired up.

For those not familiar with the Terminal, it really isn’t as intimidating as you may think, once launched you are faced with a command prompt waiting for your commands – just type/paste in a command and hit enter, some commands give you no response – it just means the command is done, other commands give you feedback.

Using the prefix of sudo is required for commands that have their applications protected in certain folders – when using sudo you will need to confirm with your admin password or iCloud password if set up that way…. lets get to it….

To find the Apache version

The Apache version that comes in OSX El Capitan is Apache/2.4.16

After starting Apache – test to see if the webserver is working in the browser – http://localhost – you should see the “It Works!” text.

If you don’t get the localhost test, you can try troubleshooting Apache to see if there is anything wrong in its config file by running

This will give you an indication of what might be wrong.

Document root is the location where the files are shared from the file system and is similar to the traditional names of ‘public_html‘ and ‘htdocs‘, OSX has historically had 2 web roots one at a system level and one at a user level – you can set both up or just run with one, the user level one allows multiple accounts to have their own web root whilst the system one is global for all users. It seems there is less effort from Apple in continuing with the user level one but it still can be set up with a couple of extra tweaks in configuration files. It is easier to use the user level one as you don’t have to keep on authenticating as an admin user.

– the default system document root is still found at –

The files are shared in the filing system at –

The other web root directory which is missing by default is the ‘~/Sites’ folder in the User account. This takes a bit longer to set up but some users are very accustomed to using it.

You need to make a “Sites” folder at the root level of your account and then it will work. Once you make the Sites folder you will notice that it has a unique icon which is a throwback from a few versions older. Make that folder before you set up the user configuration file described next.

You have to make a few additional tweaks to get the ~/Sites folder back up and running.

Add  a “username.conf” filed under:

If you don’t already have one (very likely), then create one named by the short username of the account with the suffix .conf, its location and permissions/ownership is best tackled by using the Terminal, the text editor ‘nano‘ would be the best tool to deal with this.

Launch Terminal, (Applications/Utilities), and follow the commands below, first one gets you to the right spot, 2nd one cracks open the text editor on the command line (swap ‘username‘ with your account’s shortname, if you don’t know your account shortname type ‘whoami‘ the Terminal prompt):

Then add the content below swapping in your ‘username’ in the code below:

Permissions on the file should be:

If not you need to change…

Open the main httpd.conf and allow some modules:

And make sure these modules are uncommented (the first 2 should already be on a clean install):

Whilst you have this file open also to get php running uncomment. (Mentioned also in the PHP part of the article).

Save all your changes (Control + O in nano)

Then open another Apache config file and uncomment another file:

Save all your changes (Control + O in nano)

Restart Apache for the new file to be read:

Then this user level document root will be viewable at:

You should only see a directory tree like structure if the folder is empty. 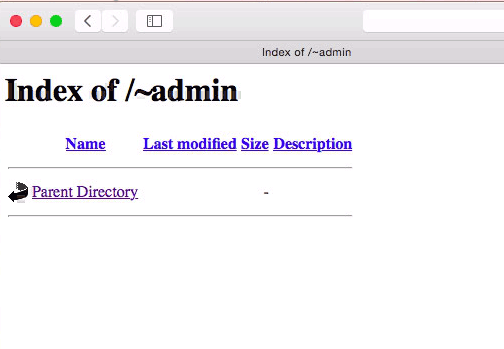 If you are going to use the document root at /Library/WebServer/Documents it is a good idea to allow any .htaccess files used to override the default settings – this can be accomplished by editing the httpd.conf file at line 217 and setting the AllowOverride to All and then restart Apache. This is already taken care of at the Sites level webroot by following the previous step.

Also whilst here allow URL rewrites so your permalinks look clean not ugly.

Uncomment in httpd.conf – should be uncommented on a clean install.

Use “control” + “w” to search within nano and search for ‘php’ this will land you on the right line then uncomment the line (remove the #):

Reload apache to kick in

To see and test PHP, create a file name it “phpinfo.php” and file it in your document root with the contents below, then view it in a browser.

MySQL is again a missing component in OS X 10.11 and needs to be dowloaded from the MySQL site use the Mac OS X 10.10 (x86, 64-bit), DMG Archive version (works on 10.11). The latest version available is MySQL 5.7.9. This version corrects previous issues with starting mysql on boot as Apple changed the launch process on OSX Yosemite onwards.

If you are upgrading from a previous OSX and have an older MySQL version you do not have to update it, it will work just with the same start up issue. One thing with MySQL upgrades always take a data dump of your database in case things go south and before you upgrade to El Capitan make sure your MySQL Server is not running.

When downloading you don’t have to sign up, look for » No thanks, just take me to the downloads!  – go straight to the download mirrors and download the software from a mirror which is closest to you.

Once downloaded open the .dmg and run the installer. 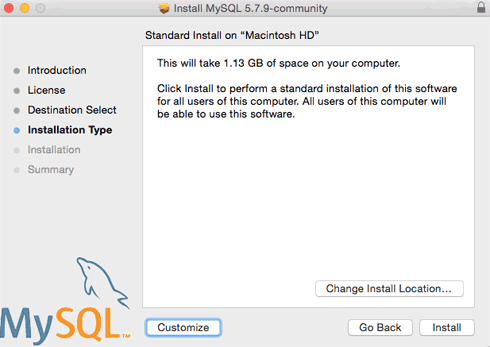 Run the standard install which will also install a System Pref Pane and support for launching MySQL on boot.

Something new in the latest version of MySQL for OSX that is after the install you are give a temporary password which you need to take a copy of, you can change that later. 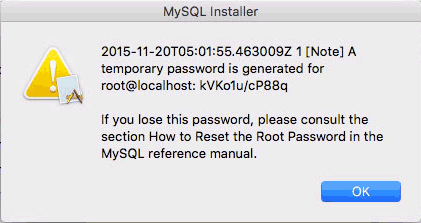 Relaunch you System Preference and you will see a new MySQL Preference, which you can start/stop MySQL and also enable to have it launch on boot.

Starting/Stopping from the command line

if you are so inclined, the start/stop commands have changed for MySQL 5.7 on OSX

To find the MySQL version from the terminal, type at the prompt:

Enter/paste your MySQL root password when prompted, the temp one you copied earlier, this also puts you in to a shell interactive dialogue with mySQL, type q to exit.

After installation, in order to use mysql commands without typing the full path to the commands you can add the mysql directory to your shell path, (optional step) this is done in your “.bash_profile” file in your home directory, if you don’t have that file just create it using vi or nano:

The first command brings you to your home directory and opens the .bash_profile file or creates a new one if it doesn’t exist, then add in the line above which adds the mysql binary path to commands that you can run. Exit the file with type “control + x” and when prompted save the change by typing “y”. Last thing to do here is to reload the shell for the above to work straight away.

You will get the version number again, just type “\q” to exit.

Note that this is not the same as the root or admin password of OSX – this is a unique password for the mysql root user, use one and remember/jot down somewhere what it is.

Fix the looming 2002 socket error – which is linking where MySQL places the socket and where OSX thinks it should be, MySQL puts it in /tmp and OSX looks for it in /var/mysql the socket is a type of file that allows mysql client/server communication.

Download phpMyAdmin, the zip English package will suit a lot of users, then unzip it and move the folder with its contents into the document root level renaming folder to ‘phpmyadmin’.

Run the set up in the browser 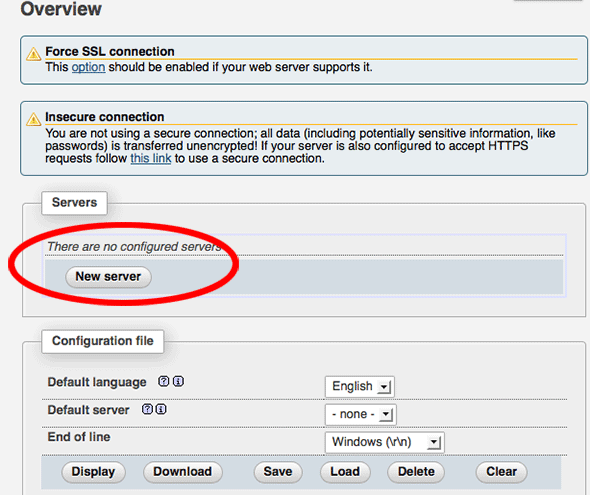 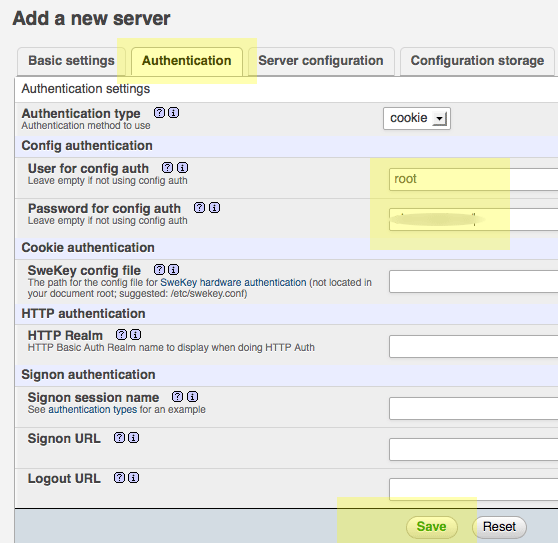 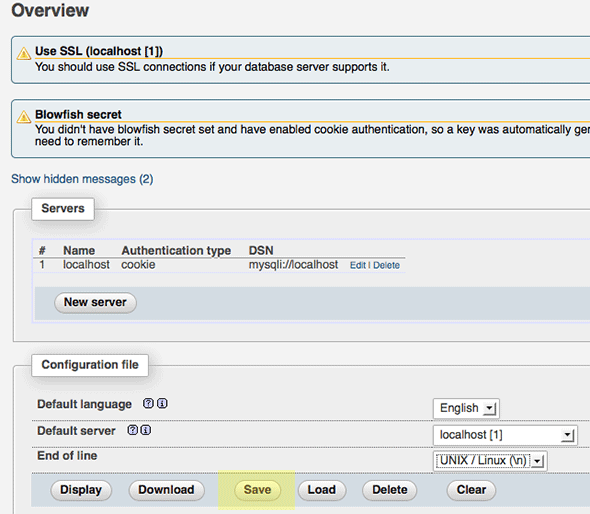 Now going to http://localhost/~username/phpmyadmin/ will now allow you to interact with your MySQL databases. 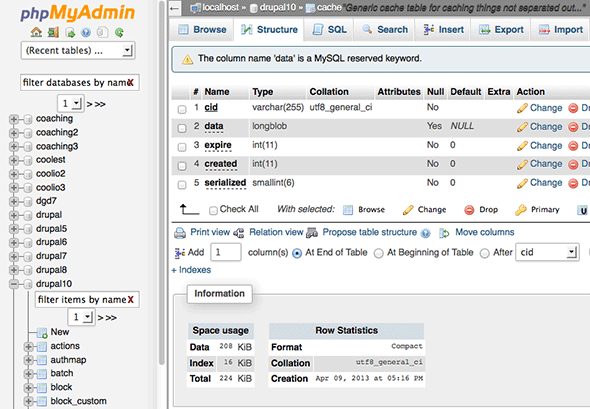 To upgrade phpmyadmin just download the latest version and copy the older ‘config.inc.php‘ from the existing directory into the new folder and replace – backup the older one just in case.

To run a website with no permission issues it is best to set the web root and its contents to be writeable by all, since it’s a local development it shouldn’t be a security issue.

Lets say that you have a site in the User Sites folder at the following location ~/Sites/testsite you would set it to be writeable like so:

If you are concerned about security then instead of making it world writeable you can set the owner to be Apache _www but when working on files you would have to authenticate more as admin you are “not” the owner, you would do this like so:

This will set the contents recursively to be owned by the Apache user.

If you had the website stored at the System level Document root at say /Library/WebServer/Documents/testsite then it would have to be the latter:

Another easier way to do this if you have a one user workstation is to change the Apache web user from _www to your account.

That’s it! You now have the native AMP stack running ontop of OSX El Capitan.