From SQL to DAX - Joining Tables

The SQL language offers the following types of JOIN:

The result of a JOIN does not depends on the presence of a relationship in the data model. You can use any column of a table in a JOIN condition.

In DAX there are two ways you can obtain a JOIN behavior. First, you can leverage existing relationships in the data model in order to query data included in different tables, just as you wrote the corresponding JOIN conditions in the DAX query. Second, you can write DAX expressions producing a result equivalent to certain types of JOIN. In any case, not all the JOIN operations available in SQL are supported in DAX.

You can test the examples shown in this article by downloading the sample files (see buttons at the end of the article) and using DAX Studio to run the DAX queries.

Using Relationships in a Data Model

The common approach to obtain a JOIN behavior in DAX is implicitly using the existing relationships. For example, consider a simple model with the tables Sales, Product, and Date. There is a relationship between Sales and each of the other three tables. If you want to see the Quantity of sales divided by Year and Product Color, you can write:

The three tables are automatically joined together using a LEFT JOIN between the Sales table (used in the expression for the Total Quantity column) and the other two tables, Date and Product.

Please, note that the direction of the LEFT JOIN is between Sales and Date, so all the rows included in the Sales table that do not have a corresponding row in Date or in Product are grouped in a BLANK value (which corresponds to the concept of NULL in SQL).

If you do not want to aggregate rows, you can simply use RELATED in order to access the columns on lookup tables – on the “one” side of the relationship. For example, consider the following syntax in SQL:

You obtain the same behavior by using the following DAX query:

You might obtain a behavior similar to an INNER JOIN by applying a filter to the result of the ADDCOLUMNS you have seen so far, removing the rows that have a blank value in the lookup table — assuming that the blank is not a value you might have in the data of that column.

You cannot obtain a CROSS JOIN behavior in DAX by just leveraging relationships in the data model.

Consider these syntaxes in SQL:

You can write equivalent syntaxes in DAX by using the NATURALLEFTOUTERJOIN and NATURALINNERJOIN functions, respectively, if there is a relationship connecting the two tables involved. 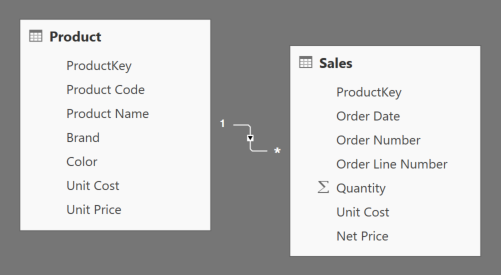 For example, this query returns all the rows in Sales that have corresponding rows in Product, including all the columns of the two tables only once.

The following query returns all the rows in Product, showing also the products that have no Sales.

In both cases, the column that defines the relationship is present only once in the result, which includes all the other columns of the two tables.
The NATURALLEFTOUTERJOIN and NATURALINNERJOIN functions can also be used with tables that have no relationships – but in this case the columns must not have a data lineage corresponding to physical columns of the data model, as explained later in this article.

Joining Tables without Relationships in DAX

Consider this syntax in SQL:

You can write an equivalent syntax in DAX by using the CROSSJOIN function:

The NATURALLEFTOUTERJOIN and NATURALINNERJOIN functions can join tables that have no relationships, too. In this case, the join condition is based on columns having the same name in the tables involved, but the columns must not have a data lineage corresponding to physical columns of the data model. This can create confusion querying physical tables of a data model.

You cannot join these two tables by using ProductKey, because such a these columns havehas the same name but different data lineages in the model. In fact, the following code generates an error:

The error generated says, “No common join columns detected. The join function ‘NATURALLEFTOUTERJOIN‘ requires at -least one common join column”. A similar message is displayed in case a NATURALINNERJOIN is executed.

From a performance point of view, a better solution involves the use of TREATAS:

The two solutions share a common goal: providing to the join function in DAX two tables that have one or more columns with the same data lineage. Such column(s) will be used to join the two tables and produce the result.

Former versions of DAX do not have NATURALLEFTJOIN and NATURALINNERJOIN. You can obtain the equivalent of an INNER by embedding the CROSSJOIN expression into a filter, though this is not suggested in case you have to aggregate the result (as will we see later). Consider the following INNER JOIN in SQL:

You would write an equivalent syntax in DAX using the following expression:

There is no simple way of obtaining a syntax in older versions of DAX – up to 2014 – corresponding to a LEFT JOIN in SQL. Nevertheless, you have an alternative if you can assume that you have a many-to-one relationship between the table on the left side and the table on the right side. This was the case of LEFT JOIN using relationships in DAX, and you have seen the solution in DAX using RELATED. If the relationship does not exist, you can use the LOOKUPVALUE function instead.

You can write it in DAX as follows:

The version using RELATED is more efficient, but this latter could be a good alternative if the relationship does not exist.
Finally, consider the query that aggregates the result of a LEFT JOIN in SQL, like the one seen previously (we only added the ORDER BY clause):

You can use two approaches here. The first is to leverage the LOOKUPVALUE syntax, aggregating the result as shown in the following DAX syntax:

In DAX the best way to join tables is always by leveraging physical relationships in the data model, because it results in simpler and faster DAX code. Several techniques are available in DAX in order to join tables. These can be useful for generating calculated tables or small tables in complex expressions that are being used in measures and in calculated columns. However, these techniques are more expensive from a performance point of view and also result in a more complex DAX code.