While the practice of Continuous Integration (CI) started with application code, you can apply the same principles to databases. Database CI is the process by which we build, test and deploy the database on commit of every database change, and report any errors. In this way, CI reduces your feedback loop such that changes that break the build are caught as soon as they are committed to source control

I’ve used various build, test and deployment tools to implement CI, but recently a customer asked for a database CI demo using the Redgate tools and Jenkins. I got it up and running in about an hour, despite the fact I’d never used Jenkins before. This article documents the process for a SQL Server database. If you use an Oracle database, you should go here instead.

Before you start, here’s what you need

For a Proof of Concept, you can just run everything locally, but a more typical set up may look something like Figure 1. 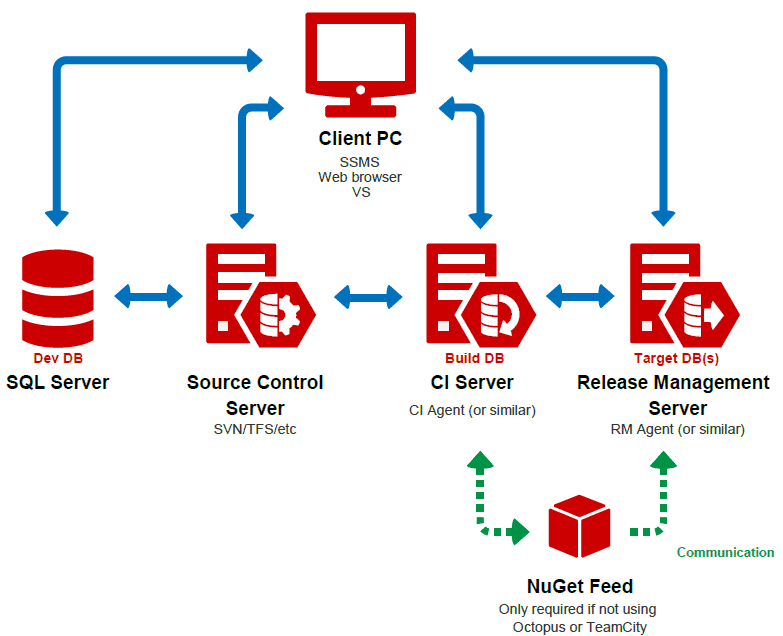 This post assumes you already have SQL Source Control set up with SVN and that you broadly understand how it works, but the process is very similar for any other version control system. If you have these bits and pieces in place, you’re ready to follow in my footsteps!

SQL Change Automation will take our source code, create a new temporary database in LocalDB and deploy our source code to it to ensure the code compiles (a process called schema validation). This ensures your syntax is accurate and will catch any broken dependencies that would render your source code undeployable. If you prefer, you can build your databases on a named SQL Server instance instead. This can be useful if LocalDB doesn’t support all the features you need, or if you have dependencies on other databases.

Once validated, SQL Change Automation will delete the temporary database because if we’re running builds on every commit, we don’t want hundreds of test databases left on the server. Finally, it creates a NuGet package for this version of the database in an output directory.

Finally, you have the option to run two additional actions (commented out by default in Listing 1):

Open PowerShell ISE and copy Listing 1 into the top section:

To run it in your environment:

Now Jenkins knows how to find your source code and when to run a build, but we haven’t told Jenkins to do anything with the source code yet. We’ll cover that in step 3.

There are various ways to run PowerShell scripts from Jenkins:

We’re going to use the third option, because it avoids installing any additional Jenkins plugins. However, if you already have the PowerShell plug-in installed or you can easily install it, then it’s fine to use that instead.

Now, each time you commit to source control, within 60 seconds Jenkins will run that batch command. This will execute your PowerShell script with two custom parameters, one for the location to which Jenkins has checked out your database source code, and the other for the Jenkins build number, which will be used as the NuGet package version number.

And that’s that. Now commit something to source control and see if it works. If it doesn’t, check the build log to troubleshoot it. If you get it working first time, you did better than me on my first attempt! It took me four or five builds before everything worked because of mistakes in the way I configured Jenkins or my PowerShell/parameters and so on. If your builds fail, check the logs. I’ve listed some of the other common mistakes (and fixes) below to help with troubleshooting:

It isn’t that hard and doesn’t take that long to set up in practice. Now you can catch mistakes early using Jenkins and SQL Change Automation, and if you set up automated deployment using a release management tool, you’ll easily be able to deploy your databases throughout your pipeline.