SQL Data Warehouse leverages a scale out architecture to distribute computational processing of data across multiple nodes. The unit of scale is an abstraction of compute power that is known as a data warehouse unit. SQL Data Warehouse separates compute from storage which enables you to scale compute independently of the data in your system. 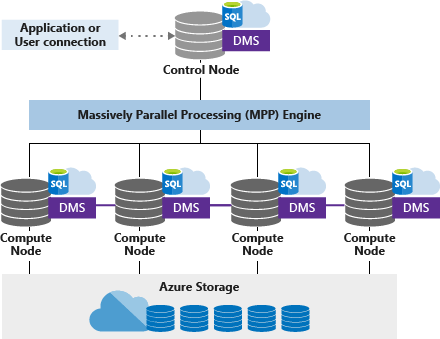 SQL Data Warehouse uses a node-based architecture. Applications connect and issue T-SQL commands to a Control node, which is the single point of entry for the data warehouse. The Control node runs the MPP engine which optimizes queries for parallel processing, and then passes operations to Compute nodes to do their work in parallel. The Compute nodes store all user data in Azure Storage and run the parallel queries. The Data Movement Service (DMS) is a system-level internal service that moves data across the nodes as necessary to run queries in parallel and return accurate results.

With decoupled storage and compute, SQL Data Warehouse can:

The Control node is the brain of the data warehouse. It is the front end that interacts with all applications and connections. The MPP engine runs on the Control node to optimize and coordinate parallel queries. When you submit a T-SQL query to SQL Data Warehouse, the Control node transforms it into queries that run against each distribution in parallel.

The Compute nodes provide the computational power. Distributions map to Compute nodes for processing. As you pay for more compute resources, SQL Data Warehouse re-maps the distributions to the available Compute nodes. The number of compute nodes ranges from 1 to 60, and is determined by the service level for the data warehouse.

Data Movement Service (DMS) is the data transport technology that coordinates data movement between the Compute nodes. Some queries require data movement to ensure the parallel queries return accurate results. When data movement is required, DMS ensures the right data gets to the right location.

A hash distributed table can deliver the highest query performance for joins and aggregations on large tables. 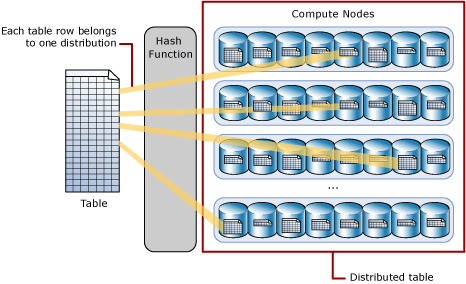 There are performance considerations for the selection of a distribution column, such as distinctness, data skew, and the types of queries that run on the system.

A round-robin table is the simplest table to create and delivers fast performance when used as a staging table for loads.

A table that is replicated caches a full copy of the table on each compute node. Consequently, replicating a table removes the need to transfer data among compute nodes before a join or aggregation. Replicated tables are best utilized with small tables. Extra storage is required and there are additional overheads that are incurred when writing data which make large tables impractical. 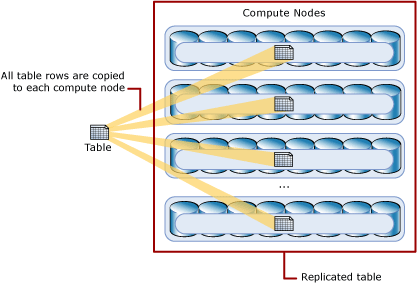